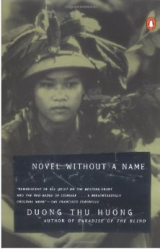 For weeks now, I have participated in David Abram’s #SundaySentence challenge.  This week, instead of sharing just one sentence without commentary as per his rules, I’ll be sharing a handful of great ones from Vietnamese author & activist Duong Thu Huong‘s  Novel without a Name.

I was recently introduced to this moving account of the Vietnam war by Caroline of the Beauty is a Sleeping Cat blog as part of this year’s Literature & War Readalong.  Over on Caroline’s blog, I said how blown away I was by Huong’s rich prose, and called it a perfect storm of a book because of the way that the descriptive elements, dialogue and characterization came together so beautifully.

A perfect example of characterization in this passage, which describes a liaison agent that is guiding main character Quan into another sector of the Communist-occupied area:

He had a pug nose and puffy red eyes, the kind of face they say brings bad luck. There was something sinister about him. But then he was just a faithful liaison agent, by all appearances a gentle, decent man. God bless him.  After all, he had survived 317 bombardments.

Then there is this passage, which details an improbable find that Quan makes in a decaying, bombed-out shelter after the liaison agent leaves him on his own:

I hacked away colocassias along a rock wall. A house appeared, or more like a room without a roof, sealed off by four rock walls, meticulously layered like a box without a lid, bottomless. In the middle, in a hammock strung between two trees, lay a human skeleton. It looked as if it was sleeping there. The bones, intact, shone an immaculate white…The dead man’s face was frozen in a toothy grin; his teeth were shiny, straight. They were the teeth of a young man. Like me, he must have wandered for days and days in this surreal valley shrouded in fog, choked with vegetation….

The fog rolled across the ground, seeped into my armpits, crawled up my neck. I heard, as if in a dream, the strain of a flute….

The immaculate skeleton looked at me, laughing, as if to say, ‘So I’m still whole. Magnificent, isn’t it, companion?’ The nylon hammock  [too] was still in perfect shape. Our civilization of plastics has worked miracles for this century.

That knock-out line, “spoken’ by the skeleton, just hangs there in all that lush vegetation haunting me well into the next scenes.  Soon after this encounter, in another shelter, a now bedridden Quan examines his surroundings:

My head resting on my palms, I examined the bunker’s roof beams. On the main beam, in a furrow, I spotted a nest of fleas. Sated, they slept soundly. The war was a paradise for them. They lived well, always satisfied. We offered them unlimited blood. This was a meagre tax compared to the tributes the bombs claimed from us.

Everything about that paragraph is just…pulsing…like those falling bombs.  More later on my thoughts on the book and its author.

2 thoughts on “#SundaySentence Plus”

This site uses Akismet to reduce spam. Learn how your comment data is processed.