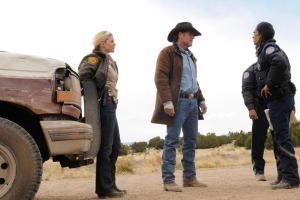 Ever since A&E announced that it was dropping its cowboy crime drama (the audience was too skewed towards older folks, bad for advertisers, they said) Longmire fans have been lighting up twitter with the #LongLiveLongmire campaign in hopes of attracting a new home for the program.

Based on Craig Johnson’s popular mystery novels, the show is one of few on television that not only features Native American faces, but gives the actors juicy roles. And with the advice of consultant Marcus Red Thunder, close friend of Johnson’s and the inspiration for the fictional Henry Standing Bear character, the program has plowed forward with some hot-button Native American issues, and done so in style.

Besides its regular Native talent ( I see you drooling over Zahn McClarnon’s long, gorgeous hair) there is a host of smaller roles that have seen the likes of Native Americans David Midthunder, Irene Bedard, Nathaniel Arcand, Gary Farmer and Kimberley Guerrero, for starters.

With networks clamoring for diversity, why hasn’t this perfect storm been picked up already?? I mean, this is the total package, people!!  Great writing, a whole crop of Bad NDN’s, and a stellar group of non-Native actors (one of which is a SciFy phenom). Not to mention 6 million fans captured and held in the SUMMER, when viewing drops in the face of other distractions.

We need more stories and poems and shows that bring us all the beauty of our many tribal nations, not less.

And speaking of poetry, I first wanted to share this quote from activist/poet/social commentator June Jordan, in which she urges us to understand that:

Poetry means taking control of the language of your life

and exploring it without bounds to its very limits.

And so, in that vein, let’s explore some of the voices from Indian Country, who are doing just that. Here is Ryan Red Corn‘s ” Bad Indians“:

For more on the text and its many allusions, see this writeup on the poem as part of an aboriginal studies curriculum.

Next up is Deborah Miranda‘s moving “I Am Not a Witness”, which begins:

I found Coyote, Eagle, and Momoy
in a book, but cannot read
the Chumash words. I found
photographs of bedrock slabs pocked by
hundreds of acorn-grinding holes,
but the holes are empty, the stone

pestles that would curve to my grip
lie dead behind museum glass.
Mountains and rivers and oaks rise
in Spanish accents: San Gabriel,
Santa Ynez, Robles.
These are not real names.
Some of our bones rest in 4000 graves
out back behind the Mission.
Some of our bones are mixed into…

You’ve probably seen the promos for the Longmire TV series over on A&E. If not, you should be watching.  Crammed with great actors and Lou Diamond Phillips likes to tweet about all the yummie food that he whips up for the cast. Can’t wait for the cooking show LDP! 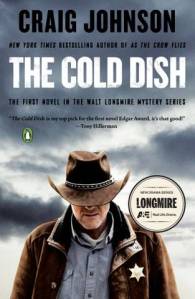 What you probably don’t know is that the books the show is based on are a fabulous read in themselves.  And I’m not just saying that so you can add to your already mountainous reading list.

Well, I am saying add them to your mountainous reading list.  But what I really want you to do is approach them with an eye to honing your craft.

Besides being an ex-cop turned cowboy, Craig Johnson, brain-father of the Walt Longmire mystery/western novels, is also a PhD in..get this..PLAYWRITING.

Yep. And what do we know about playwrights??????

They are exceptionally well-tuned to language, and dialogue in particular.

Johnson handles his with the ear of a master.

Oh. Light bulb moment. Well, who couldn’t help but learn from that!

Let me give you a taste from one of the novels.  This passage comes from the first chapter of The Cold Dish, which is Book #1 in the series, and it just so happens to be one of my favorites:

We looked at each other, his expression carrying the self-deprecation that usually held some hidden meaning. “Beer, Tonto?’ he asked as he handed me an open Rainier and continued past with what appeared to be a tire iron in the other hand. I looked through the poolroom into the bar proper and could make out about eight people seated on stools, outlined by the fluorescent glow of the beer coolers. Big night. I took a sip and followed him to the far end of the room where he seemed to be preparing to tear apart the wall. Leaning against the offending structure he slipped the flat end of the tire iron behind the weenie-wood that made up the interior of the bar.

“You forget to pay your REA bill again?” He paused for a second to give me a dirty look and then put all 220 pounds into the tire iron and propelled the four-foot board from the wall, with nails still attached, to clatter at our feet. I bent from my vantage point to look at the ringshanked holes in the plaster surface that lay underneath the removed board.  Henry’s face was, as always impassive.

“Damn.” Without another word, he slipped the tire iron beneath the next board and popped it to the floor. Same result. “Damn.”

I figured it was time to ask, “Are we redecorating, or are we looking for something specific?” He gestured to the wall with a hand that pleaded and threatened at the same time.

“You covered it up with boards.”

Another sidelong glance. “At least I have walls.”

Henry was one of the chosen few who had been to the cabin. His statement was hard to refute. “I’ve been thinking about getting an imitation sheepskin cover for my recliner.”  This got a long look.

I gave the question thought. “No, but I’m working on it.” He grunted a little laugh and popped off another board, which added to the considerable pile which was collecting at our feet.

“Damn.” He placed the tire iron in the next board. “Cady call you?”

“Huh…she called me.” He popped the board loose to reveal the gray cover of an ancient fuse box. “Yes.”

WOW! You can read more of the surrounding passages on the Amazon preview. But you’ll probably want the boxed set.

Take your time, work through the series, and I promise that you’ll pick up more than you would from a whole stack of writing books.  I know that I have, and I don’t even like mysteries.  Huh.  Must be all the great characters.  Yes, it is so.