If I asked you to name a Renaissance painter, you’d likely rattle off a list that included a hand full of scruffy-faced men who were focused mainly on religious, historical and mythological subjects. Think Michelangelo’s Sistine Chapel paintings or Botticelli’s infamous “The Birth of Venus.” Heck, recite all the Ninja turtles and you’re pretty well covered.

You might then recall that ubiquitous portrait of Leonardo da Vinci’s barely smiling muse or remember having run across a reproduction of one of Raphael’s lush Madonnas in church. It was, after all, the first great age of portraiture, and its fruits are still highly lauded and copied.

You are unlikely, however, to have seen any of the work of the immensely talented Sofonisba Anguissola (c. 1532-1625, pictured above), an educated noblewoman who was the darling of several courts and an international celebrity in her own time.

It may have been an age of rebirth, but Renaissance women remained (as always) caged in the home, largely invisible and hindered by both custom and law. For one Italian beauty, though, the doors would open.

Anguissola was blessed to have an accommodating and enlightened father who recognized her talent from a young age and provided a well-rounded education that was next to unheard of for females. Thanks to these experiences, she became one of the world’s first well-known female artists and a sought-after portraitist in her own right.

Her inventive styling and sharp eye even landed her long-term gigs at the highly regarded Spanish and Austrian courts, as well as lessons from the great Michelangelo himself. 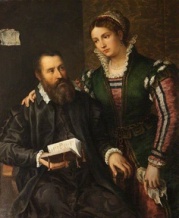 Vasari and His Wife

Boy and His Dog

Portrait of a Young Woman

She was also one of the first females accepted as a male artist’s apprentice, winning a coveted spot with the famed Bernardino Campi of the Lombard school, from whom she garnered much of her finishing skills.

But ultimately, she would surpass this master and go on to develop a unique style of her own, a type of portraiture that blended honesty and informalness in a way that made her wildly popular with patrons and students alike. Up-and-comers Rubens and Van Eyck would both sit at her knee and highly praise her instruction.

When asked once by Pope Pius IV to explain the success of her style, she told him simply that “in those parts which can be portrayed by art, I have not failed to use all the diligence in my power and knowledge, in order to present the truth.”

Bold words for a bold woman, and if some of her truths were slightly subversive, then all the better! Heads were already reeling from the news of her quickie marriage to a much younger sea captain, and if tongues were not wagging over her personal life, they were most certainly doing somersaults over a series of paintings that depicted both herself and her sisters enjoying activities that were considered off-limits to women.

“The Chess Game,’ in particular, was problematic, as it presented high-class women enjoying a game that was deemed far beyond the intellect of mere women, especially ladies of a certain station. Then again “Self-Portrait with a Spinet and Attendant” brazenly presented a woman (herself) playing an instrument that was commonly accepted as a metaphor for the female body. 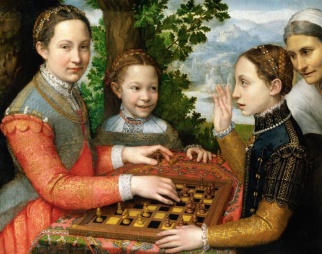 Self-Portrait at the Spinet with Attendant

I won’t go into the implications of that symbolism here, but it was precisely this open display of female self-awareness and empowerment that kept Anguissola from being so little known outside of feminist circles. It is also the reason that many of her surviving paintings (sadly, only 50) are wrongly attributed to males.

How fortunate for us then that this purposeful suppression is being slowly corrected by the work of scholars like Dr. Illya Sandra Perlingier, who has written a gorgeous hard-cover book on Anguissola’s work.

Still, it’s more than a little distressing that despite the fact that Anguissola helped to open the door to many other female artists in her day (Lavinia Fontana and Artemisia Gentileschi to name a few), women to this day are vastly under-represented in the arts.

According to the National Museum of Women in the Arts, only 5% of the works currently on display in U.S. museums were created by women, while over 90% of the artists covered in modern arts curriculum are male.

These are numbers that MUST to be changed, and we can and should look to foremothers such as Anguissola for inspiration in raising our voices as well as our brushes.