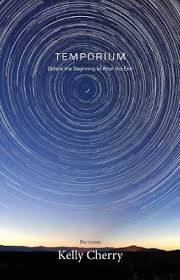 Kelly Cherry is a prolific writer, one who defies categorization and has so highly tuned her craft that her work manages to exist in perfect beauty wherever it lands, and especially– in this case–the twilight zone of hybrid prose. Her latest collection Temporium: Fictions (Press 53) shines in such a place. Not-quite prose poetry, mini-essays or fiction, Cherry describes “the book as a museum… curat[ed], harbor[ed] or displaying…bits and pieces– moments of time…arranged… more or less chronologically”.

Cleverly stitching together the previously published with new work, she delights us with characters as diverse as first century martyrs, assorted colonists, Einstein, Kafka, a literally vanishing office worker, a Ming Dynasty feminist, undead communists, aliens, and various incarnations of God. We peer in on them at all points along the cosmic ripple from pre-Big Bang darkness to post-Apocalypse reset, and we are at every junction, thoroughly entertained.

At times, I felt like the octopus from one of her six-word stories who is divested of his arm, only to be gifted two legs. The whole experience was fascinating, scary-pleasant and rocket-propelled. Like a magic trick, like a clever sleight of hand, Cherry brought out personal and universal cosmic truth without all of the inflated, academic language. Did I mention I love basically everything she writes?

I am obsessed with “Derek,” an over-loved bat and the woman who just can’t bring herself to let go of him. I am haunted by “Thomas Leigh” and a future where the last humans leave the space ark only to find themselves absorbed into the collective conscientiousness of an indigenous ‘alien’ race.

Ever the professor, the real cherry on top might be the mini-lecture/short “How to Write a Story,” a piece that manages to boil down all human conflict to the fraught interaction of one man and woman.

From any perspective, this book, maybe more so than her others, proves that Cherry is not limited by anything as mundane as region or genre or time. In one fell swoop, she unites continents, makes us believe in 3D printed souls, transcendent love, and life after the universe eats its tail like a snake.

This is a definite must-read. Scoop it up!

This site uses Akismet to reduce spam. Learn how your comment data is processed.